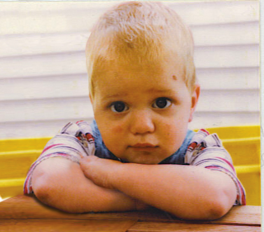 Luke Neuhedel was born October 9, 1998. On August 1, 1999 he was diagonosed with stage 4 hepatoblastoma, a very rare liver cancer that affects 1 in a million children under the age of 1 each year. Luke's doctors told us he would not survive the first round of chemotherapy...but he did. Well, he won't be able to stand the second round,,,but he did. Well, we can do surgery now to remove the cantaloupe size tumor in his belly but...  Always but...but...but...But we didn't believe in but we believed in Luke.

Luke kept plugging along for 32 months, ignoring the tubes sticking out of his chest and belly, pushing away the doctors when he wasn't in the mood, and laughing at his favorite characters --- Bear in the Big Blue House and Godzilla.

Carpe Diem with a Smile was Luke's perspective and that's how we lived. But we also lived with an eye on what was happening around us. Children going through treatment with no families. Foster children going through treatment as their families desperately tried to adopt them before they died. Parents going without so their child can have that McDonald's Happy Meal she craves.

So after Luke died March 27, 2002 we set up a charity to honor him and to help other children fighting cancer, fully believing that Pediatric Cancer Should Be an Oxymoron. LNF because an official charity in April 2002. Since then we have done what we could to help:

* Collect new toys and distribute them to children in hospitals across the US. For NYC/LI hospitals we deliver the presents with a favorite character for a special visit.

* Run a Holiday Program to grant the wishes of children.

* Help families pay their rent, home bills, gas or other transportation to get to the hospital, babysitting fees to cover siblings, textbooks for college students

* Hold an annual fundraiser LUKEFEST, which began on the anniversary of Luke's diagnosis, August 1st. Luke had beat the odds and lived a whole year with cancer. We were shocked in 2001 when we held another LUKEFEST with Luke present. After he died, LUKEFEST became a family fun carnival for the public, with pediatric cancer patients as special guests. Since 2010 LNF has performed theater productions, such as Little Shop of Horrors, Godspell, Once Upon a Mattress, and Guys & Dolls. All the funds raised from this annual event supply the grant money needed to keep our programs going throughout the year.